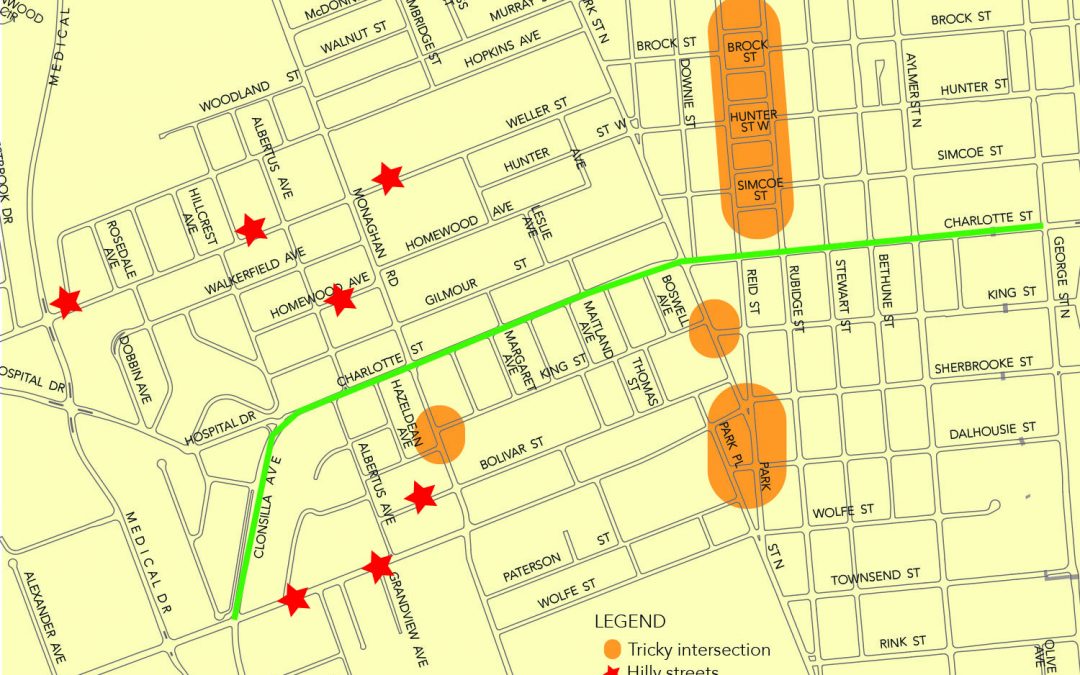 Why is this an issue now?

While the road work ranges from immediate resurfacing to longer-term detailed street designs, all current work should consider the inclusion of all-ages-and-abilities (AAA) infrastructure to support our community as it grows and embraces active transportation.

Why should Charlotte Street have bike lanes?

Vital link between west-end and core

• No east-west streets in or approaching downtown Peterborough have dedicated cycling infrastructure.

• Charlotte Street provides a vital link from the core of Peterborough to the hospital, and a direct route to destinations further west on Lansdowne, such as various shops, Holy Cross CSS, and Fleming College.

• Charlotte Street connects to some of the City’s most popular bike-commuter neighbourhoods and most densely populated neighbourhoods with the city’s core commercial and employment hub.

• Shops, restaurants, and employers want to bring more cyclists downtown, to free up more space for those who need to drive and park.

• Charlotte Street is the only route into the core without steep hills, though it is a steady, gentle incline on the way out of the downtown.

• Inserting cycling lanes on Charlotte Street may be a simple matter of restriping existing lanes, with no reconstruction of curbs or catch basins.

• The wide, two-lane section of Charlotte Street between Park Street and Monaghan Road can easily accommodate cycling lanes by relocating little-used parking on the north side of the street to the laneway behind the houses.

• Even in its current condition, Charlotte Street is the most heavily traveled east-west corridor, as observed in annual counts conducted by the City of Peterborough, GreenUP and Trent University.

• Charlotte Street was identified by PBAC survey respondents as the one of the most requested locations for cycling infrastructure, second only to ‘downtown’.

• Many cite safety concerns when asked if they ride along Charlotte Street and Clonsilla Avenue, emphasizing that they will not travel here with children or less experienced riders.

Helps Peterborough realize its vision of a healthy, connected community

• Bike lanes were proposed for Clonsilla Avenue and Charlotte Street in the 2012 City of Peterborough Comprehensive Transportation Plan.

• This link would provide the west-end with an accessible, safe route necessary for the encouragement of increased use of active transportation, which is highlighted as a main goal in numerous City planning documents (e.g. Community Well-being Plan, Age Friendly Plan, Vision 2025, the City’s Strategic Framework, draft Official Plan)

What will it take?

The proposed cycling network of the City’s current transportation plan recognizes Charlotte Street as a key cycling route to downtown, however there is often opposition to bike facilities on Charlotte Street and Clonsilla Avenue when the opportunities present themselves.

Strong community support for cycling lanes will help to convince councilors that now is the time to realize this long-standing City vision.

The preliminary cycling network of the cycling plan currently under development recognizes Charlotte Street as a key cycling route to downtown. With current resurfacing projects and network design planning, there is a chance now for the public to voice their desire for all-ages-and-abilities bike infrastructure along this corridor.

Along with this public support, we hope some creative solutions will come forward to address concerns over the loss of underused parking space on the north side of Charlotte Street; the public value of this space for safe cycling should be a governing consideration in how use of this public asset is allocated.

What does PBAC want?

PBAC would like to see all-ages-and-abilities bike infrastructure along Charlotte Street and Clonsilla Avenue, creating a bike-friendly corridor for commuters and families alike, from the highly populated residential neighbourhoods of the west into the commercial and employment hub of downtown.

How can I help get bike lanes on Charlotte St?

Contact your councillor to stress the many reasons that cycling infrastructure is required on this critical east-west connection. Encourage them to find out more about the cycling master plan and how it will promote a more accessible, equitable, and healthy Peterboroiugh.

Provide input to the P-BAC website so that we can communicate what we have heard from citizens about the importance of this issue to you and your families.